24/7 Call us for cheap Packages

We Deal Umrah And Hajj , We offer Cheap Group And Individual Umrah Packages Please Fill The Form And Get The best deal from us.


• Rules regarding the haircut during hajj/umrah?

• What are the rules regarding Ihram (Ports of Miqaat)?

• Is person appointing someone else to do qurbani allowed to cut hair/nails?

• Is it permissible to travel with my adopted sisters for umrah as their mehram?

• Is is permissible to take pills to stop period during hajj/umrah?

• Can a person use a sleeping bag as this will cover his feet?

• Is step brother a mehram?

• If a woman’s hair is prone to falling out, will she still have to pay a dam?

• Would an adopted son qualify as a Mehram?

• Can a woman go to Hajj with a group of women, without her own Mehram?

• Would my brother-in-law count as my Mehram for Hajj or Umrah if my sister is also going?

Rules regarding the haircut during hajj/umrah?

May Allah make your trip and blessed one and accept your prayers and worship, Ameen. Men have two options when they complete the Hajj or Umra; either they can shave the head (which is called Halq) or they can trim the head (which is called Qasr). The Prophet prayed for those who shave their head and those who trim it, so both are permissible (Sunan Tirmidhi, Book of Hajj, Hadith no. 837).

In your case, it is better to perform Qasr each and every time, and then shave it the last time you perform the Umra. Do not symbolically snip a few hairs from each side as Qasr. This is wrong and forbidden in Shariah. It in fact resembles the Jews who deliberately have uneven amount of hairs on their head. Instead, perform the Qasr at a barber and ensure he does cut an equal amount all over the head.

What are the rules regarding Ihram (Ports of Miqaat)?

When a person performs Hajj or Umra, then there are certain ports outside Makka from where the person must ensure he/she is in a state of Ihram. These ports are called Miqaat. These are the names and locations of the Mawaaqits;

1. Zul-Hulaifah; this is for those coming from the direction of Madina Sharif.

2. Yalamlam; this is for those coming from the direction of Yemen, India and Pakistan.

3. Juhfah; this is for those coming from the direction of Egypt, North Africa and Europe.

4. Qaran ul-Manazil; this is for those coming from the direction of Najd.

5. Zaat Irq; this is for those coming from the direction of Iraq.

As you rightly pointed out, the people already in Makka go to the outskirts of Makka to Masjid Aisha where they wear the Ihram.

Is person appointing someone else to do qurbani allowed to cut hair/nails?
When a person is performing the Hajj, then there are certain restrictions placed on what the person in the state of Ihram can and cannot do. During this state, the person cannot cut nails and cannot trim his hair. The Haji is released from the state of Ihram when the Qurbani is done, either by himself or by the appointed representative.

The two Rak’ats for the Ihram are Sunna; Jabir (may Allah be pleased with him) reports that he saw the Prophet (peace and blessings of Allah be upon him) perform two Rak’ats at Zul-Hulaifa when he wore the Ihram. We are told it is better to recite Surah Kafirun in the first Rak’at and Surah Ikhlas in the second.

Who can be a Mehram?

It is difficult to answer this question as you have not clarified what type of cousin it is. Hence, I will list the ties which a person cannot marry, as clarified by Imam al-Quduri, the classicial Hanafi scholar;

• Brother real or step (in having same father or mother)

• Foster son (through breast-feeding only)

• Foster brother (through breast-feeding only)

• Is it permissible to travel with my adopted sisters for umrah as their mehram?

If the sister in question has been formally adopted, then she is a Mehram, and thus she is suitable as a partner for Umra. Please note that it will be worthwhile taking official documents to Saudi Arabia to prove she is your adopted sister in case of any problems.

• Is is permissible to take pills to stop period during hajj/umrah?

The scholars say this is permissible when there is no long-term harm to the body in doing so. Otherwise it is forbidden.

• Can a person use a sleeping bag as this will cover his feet?

In the state of Ihram, the man should leave his feet uncovered so that the bones on the upper part of the feet are left exposed. He should not wear sandals that cover the upper part. Using a sleeping bag is merely a means of keeping oneself warm; it is not a part of clothing as such. Therefore he can use it in extreme weather. The head and face of a man should be left exposed at all times during the Ihram state.

• Is step brother a mehram?

Once the parents are married legally, then the step-children will have the same rulings as conventional children. In other words, they will be considered as normal brothers and sisters in Shariah. Therefore, they are classified as Mehrams.

In a Hadith recorded by Imam Bukhari in his Sahih (Book of Hajj, Chapter, what has been mentioned about Zamzam, Hadith no. 1529), it is mentioned that the Prophet was offered Zam Zam water, and he drank it standing up. In accordance to this practice, we too stand when we drink Zam Zam water.

• If a woman's hair is prone to falling out, will she still have to pay a dam?

The falling out of hair which occurs naturally does not void the state of Ihraam. It is only if hair is pulled out or plucked deliberately, that will void the Ihraam. Only then is the payment of Dam necessary.

If the shedding of hair is excessive, then it is good practice to give some Sadaqah. According to some of the Scholars, for every three hairs a Sadaqah equal to the amount of Fitrah is advisable.

• Would an adopted son qualify as a Mehram?

Adopted sons will not be considered as Mahram if he has not been breast-fed by the adopting mother.

• Can a woman go to Hajj with a group of women, without her own Mehram?

Imam Abu Hanifah (RA) has a very strong opinion on the issue of women travelling without Mahram. Therefore in Hanafi Mazhab a woman should not travel alone or with a group of women or with a person who is not Mahram. However according to Imam Shafeyee, women are allowed to travel in groups for the sake of importance of Hajj. Perhaps many Hajj organisers are following the opinion of Imam Shafeyee nowadays.

This is not a matter of Hajj, but a Shariah ruling on the matter of travel by women. The Hajj of a woman who travels without a Mahram will still be valid if performed correctly. However it is highly preferable, that for the purposes of Hajj, a highly auspicious event and one of the five pillars of Islam, care is taken to follow Shariah rulings in the best possible way.

• Would my brother-in-law count as my Mehram for Hajj or Umrah if my sister is also going?

A Sister’s husband will not be considered as Mahram. It doesn’t matter if the sister is also travelling. 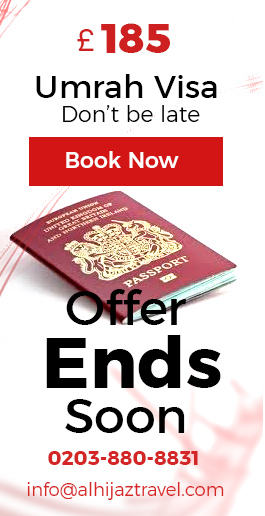 Why Book With Us

I found Alhijaztravel whilst doing an internet search for an Umrah package which included visiting the Masjid al Aqsa. After speaking to my brother who had an experience with Alhijaz, I booked the Umrah and Al-aqsa package over easter holidays in April 2014 for my family and myself. The team was very accommodating and helpful, throughout the booking process and the trip itself. We had an amazing time and I would recommend to my friends.

Alhamdulillah, we have just returned from a 2 week Umrah package organized by Alhijaztravel. Alhamdulillah it was an amazing and wonderful experience. From beginning to end it was well organized and supportive, we received an excellent service beforehand and during our time there.thanks to the team of Al-hijaz Travel UK.

I would like to register my thanks to all of you for making the recent Umrah journey for my family an excellent experience. This was the third time that a group of us from my family travelled to the Haramayn Sharifayn with you in as many years. May Allah ta'ala accept your efforts and bless you with even more tawfiq to keep organizing such marvelous Umrah packages for Muslim Ummah.

I just personally found it a little difficult with the family staying in Aziziya, other than that, it was great Alhamdulillah. I would recommend to my family and friends to take the advantage of the Umrah package offered by Alhijaztravels. Surely they will also have the memorable journey to the Holy destination.

Assalmualaikum wa rahmatullahi wa barakatuhu. Jzk for the Umrah experience provided by the Alhijaztravels. I have no complaints whatsoever about the quality of the accommodation, the service provided for transportation and more. All the moments spend in the performance of Umrah and the Ziyarat, were out spoken. The Umrah package provided by Alhijaz was surely the best.

We facilitate guests of Almighty Allah under one stop operation for all major Umrah & Hajj procedures prerequisite for a British Muslim/Muslimah. Clarity and promise of services delivery is observed as basic company policy. We are always online to handle your situations to address the issues on the spot with acceptable solutions on both ends.

Our dynamic web portal (website) for Umrah & Hajj, renders easy to use and comprehensive flights booking procedures with visa services to Saudi Arabia for Umrah and Hajj purposes. We make sure that our online customers get best bottom low air fares on major airline bookings.

We let you feel privileged with dedicated and private travel and Umrah Guides to handle your odds and hesitations in this sacred tour and holy intention to fulfill with English and Urdu speaking Umrah and Hajj guides. W make it sure that you perform real Umrah and Hajj with us filled with aspirations of faith and divine forgiveness from Almighty Allah, no doubt Allah loves those who seek his forgiveness.

Once you have been landed in Saudi Arabia, We take rest all on our shoulders to manage your stay with promised hotel and rooms, food and transportation which is subject to the Umrah & Hajj packages you choose for yourself. We provide quality and comfortable transports to manage your inter-city travel requirements for Zayarat visiting after you have done at Makkah in Haram shreef.

Times Travel T/A Alhijaz Travel is a bonded member of ATOL and IATA. Many of the flights and flight-inclusive holidays on this website are financially protected by the ATOL scheme. But ATOL protection does not apply to all holiday and travel services listed. Please ask us to confirm what protection may apply to your booking. If you do not receive an ATOL Certificate then the booking will not be ATOL protected. If you do receive an ATOL Certificate but all the parts of your trip are not listed on it, those parts will not be ATOL protected. Please see our booking conditions for information, or for more information about financial protection and the ATOL Certificate go to: www.atol.org.uk/ATOLCertificate. View our Terms and Conditions.